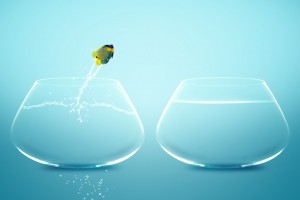 One of the themes that’s been showing up in my coaching work with clients has been the idea of risk-taking and courage. Being an entrepreneur is, inherently, a courageous choice. You trade some kinds of “certainty” for situations which are less certain. On the other hand, though, we know that even the largest corporations are going through downsizing and acquisitions, so there are no guarantees in the corporate world either.

The specific type of courage I wanted to focus on today is the courage to try again- how do you demonstrate resilience, even in the face of disappointment.

On my best days, I remind myself that disappointment means I had the courage to go for what I wanted. Sometimes the act of taking action is the most important thing you can do; especially if you’ve felt paralyzed by perfectionism or mired in indecision. (And don’t worry, it happens to all of us, at one time or another.) In these cases, the act of acting is more important than the outcome.

It’s always easier to criticize than it is to create. I wrote a blog post about this some time ago: Criticism is Easy, Creating is Hard

And that reminds me of this: I was watching an episode of Shark Tank the other night and was marveling at how much risk the entrepreneurs who appear on the show are willing to take. Not only are they willing to risk being criticized and judged by the Sharks, they open themselves up to the millions of armchair critics who sit home and think they could do the pitching better.

Yet how many of those watching actually take the risk of going on Shark Tank and being judged, criticized, or ridiculed? I know I certainly haven’t.

And so, as much as anything, I just wanted to share that we all experience disappointments in life and work. We all go for things that we don’t get. We each may experience criticism and judgment about our “failure”- either from ourselves, or from other people.

The truth is, though, none of it matters. It takes courage to risk and to try, especially when the outcome is uncertain.

But remember that every action you take towards what you want brings you closer to getting it. (If nothing else, you’ve found another way that won’t work.)

I hope to remember this as I keep stepping out more and taking more risks this year, because I know that on the other side of risk is where all the good stuff is. 🙂